What Thunder Fans Need to Know About Lisfranc Injuries 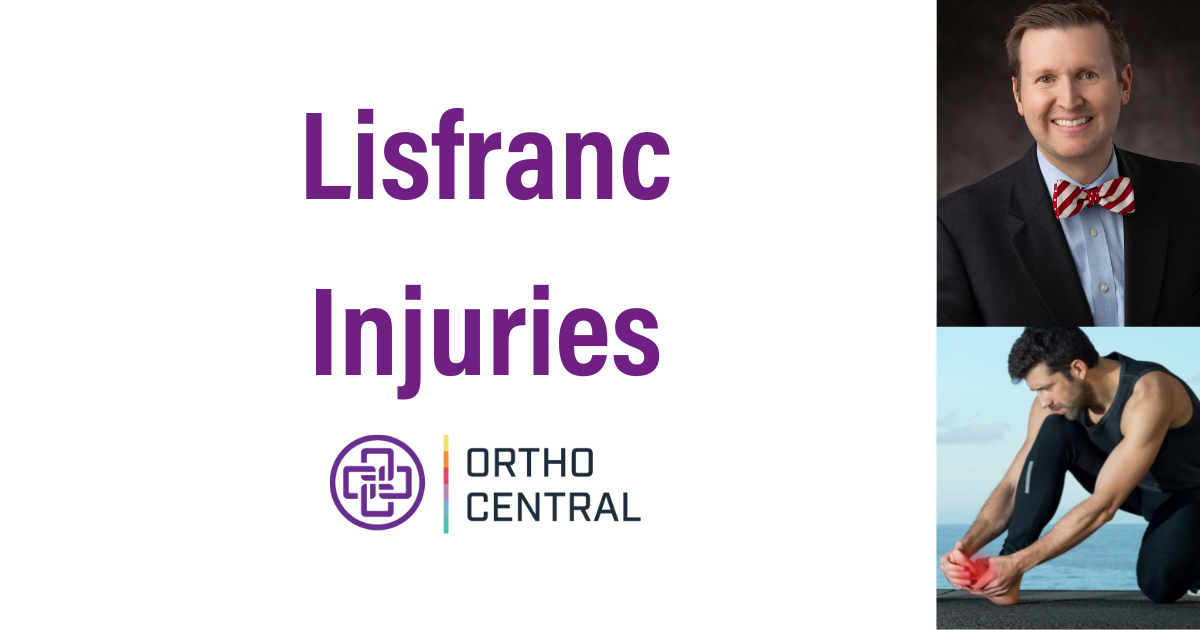 It was announced recently that Oklahoma City Thunder rookie and number two overall draft pick, Chet Holmgren, would miss the entirety of the 2022-2023 NBA season after he suffered a Lisfranc injury during a pro-am event in Seattle. Naturally, many Thunder fans are concerned about how this injury will affect the Thunder rookie moving forward.

In this article, Brian Clowers, M.D., an orthopedic surgeon and foot and ankle specialist with Norman Regional’s Ortho Central, sheds some light on this injury, including what the injury is, how long a  recovery might take and whether this is an injury that could hinder athletic performance in the future.

What is a Lisfranc Injury?

“The Lisfranc is a complex of multiple joints in the midfoot that make up the bony arch.  This is analogous to a Roman arch in architecture, which has multiple stones that are arranged in a very specific configuration to optimize stability and structure.  In the foot, this architecture is supported by ligaments that connect the bones together.  Those ligaments are susceptible to injury when they are placed under stress by twisting or rotational moments, or excessive flexion or extension through that portion of the foot.  The bones in this construct can also sustain injuries, such as fractures or injuries to the cartilage that allow those bones to glide on each other during movement.  If the joint complex loses stability or its natural configuration and alignment, this can affect the foot’s ability to bear weight and perform higher level functions such as balance and push-off during athletic activities.

The injury was originally described by a French general surgeon, Jacques Lisfranc de St. Martin, who originally described to this fracture pattern after seeing it in multiple French shoulders during battle.  The joint complex was also named for him.  These injuries are not exceptionally common in the general public, however they are seen more frequently in sports that require significant amounts of agility such as football and basketball.  These injuries can also be seen in the setting of trauma, such as a car accident or a fall from a significant height, where the foot sustains a large axial load.

Can an athlete return to pre-injury form after sustaining a Lisfranc injury?

I do think it is possible for an athlete to return to their pre-injury athletic status after sustaining this type of injury.  However, it is very highly dependent on the severity and type of the injury.  One of the goals of surgical management for this type of injury is to try to preserve the anatomy of the midfoot and to allow that anatomy to function as it did before the injury.  However, it is possible that more severe injuries can lead to damage to the cartilage that could result in arthritis in the future.

How long does take to recover from a Lisfranc injury?

The answer to this question is also heavily dependent on the nature and severity of the injury.  A mild injury may only require immobilization for 4-6 weeks with advancement of athletic activity after 6-8 weeks.  An injury that requires surgical intervention can take up to 6-8 weeks before any weight is allowed to be placed on the foot.  Once weight-bearing is allowed it can still take another 2-3 months before advancement of athletic activity begins.  Most injuries that require surgical intervention also require a significant amount of rehabilitation with physical therapy.  In most cases of injuries that require surgery, full release to athletic activity does not occur until at least 4-6 months from surgery.

It can be challenging to predict the exact time table for this type of injury, considering that the specifics on recovery time, likelihood of repeated injury or whether the injury will pose problems for future performance are highly dependent on the individual themselves as well as the nature of the injury and the treatment required.  Hopefully with his early diagnosis and fairly rapid surgical intervention, as well as his access to world class rehabilitation facilities and professionals, we can hope that Chet Holmgren will not miss any more playing time past the 2022-2023 season!

If you are interested in learning more about Dr. Clowers and Ortho Central, or if you have your own foot or ankle issues, call 405-360-6764 to schedule an appointment!